A Letter to Mayor Garcetti: A First Step in Combating Anti-Black Racism 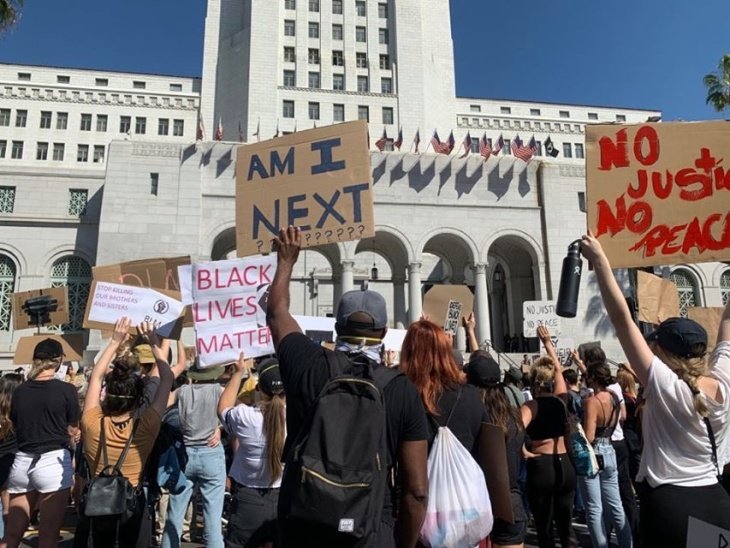 We have not seen a pandemic of the scale, swiftness, and severity of COVID-19 in over a century. But the virus of police violence against Black people has been with us for too long and is nothing new. While the current public health crisis is the result of a naturally occurring virus, the current crisis of public trust in law enforcement is entirely man-made. It is a result of broken promises and the failure of our institutions and our leaders to fundamentally address the problem of police violence and racial inequality in our public policies.

The moment the video of the murder of George Floyd first became public and Angelenos began expressing their outrage and grief for the Black lives killed by police, the city under your leadership could have chosen to walk alongside communities that are grieving under the dual pandemics of COVID-19 and police violence.

Instead, under your leadership, the city chose to further escalate tension and police violence by allowing officers to tear gas and beat grieving but peaceful demonstrators, calling in the National Guard and enacting citywide curfews with little warning and leaving hard-working Angelenos stranded. These decisions have not only played into the hands of the monstrous response by the White House for further repression and violence against Americans, but have deepened the hurt and mistrust within Black, Indigenous and people of color communities.

We have been here before, Mr. Mayor and we know where these decisions lead. The city’s response to the uprising of 1992 and police beating of Rodney King is a scourge on our city’s past and has negatively defined us ever since. Don’t let this be your legacy as well. You can choose to learn from the mistakes of past leaders and redefine how Los Angeles addresses police violence and values the lives of our Black residents. There is still a chance for this City to recover from these early decisions. There is still a chance to make the rhetoric of love and inclusion real and meaningful in this City.

This coalition of community, labor, policy and academic partners have been ready. We are ready with real community-driven solutions. And we are ready to work with you to re-imagine what care and justice looks like in Los Angeles. We are ready to help you chart a new path for this city that we all love.

The City of Los Angeles must implement a vision for change that directly addresses anti-Black racism and its long and deep history of disinvestment in our Black community. This is no time for half-measures that do not acknowledge the central importance of anti-Black racism to this crisis. Investments must be targeted to the specific people and communities that have been most impacted by over-policing, using data that specifically calls out race — not divided equally between Council districts as in the politics of the past.

We demand the following:

1. Pull back the National Guard and launch immediate investigations on LAPD use of
force on peaceful protests

a. Launch an immediate investigation into LAPD’s tactics and actions at the peaceful protest on May 30, 2020, in the Fairfax district, where there were several eyewitness reports of LAPD use of excessive force against nonviolent protesters including, but not limited to, at the intersection of Fairfax and 3rd Street. These tactics instigated chaos and compromised the safety of peaceful protesters

2. The City must reduce the LAPD budget by at least $250 million, and adopt long-term strategies to significantly reduce its spending on policing.

Immediately, the city must reduce the LAPD budget by at least $250 million, inclusive of the $123 million increase in the mayor’s proposal for raises within LAPD ranks. These cuts can come using the same tools — such as furloughs, reduction of overtime, the liquidation of equipment, and staffing adjustments — that are being used to reduce spending on all other city departments. In fact, many of the current cuts are being taken by the city workforce – not affecting police officers. Community leaders must be engaged in the process to determine budget adjustments and reallocations. Longer-term,
the city must reduce its overall police spending and staffing by strategically reducing the scale of suppressive policing in the city, enabling the city to sustain investments in the programs and approaches in the second and third recommendations.

3. Announce a $500 million investment for over policed, high needs communities — prioritizing Black communities first, then inclusive of others:

b. $25 million annually to fully fund a stand-alone Office of Racial Equity, inclusive of all the elements outlined in the resolution passed by the City Council in 2019. The Office of Racial Equity should also manage a Community Justice Fund of $100 million ($10 million a year for ten years) to fund community based organizations to create space and community for intergenerational community connection that challenges anti-Black racism, Indigenous erasure, and other forms of institutional discrimination, and promotes the affirmation of Black, Indigenous and other people of color.

c. Fully fund and staff the city’s Civil and Human Rights Commission to enforce laws against discrimination, requiring at least $20 million per year.

d. $100 million to build, establish, and fund 10 healing centers in communities that have been largely impacted by officer involved shootings, police brutality, and community violence. The centers will serve to assist individuals, families, and communities through culturally appropriate trauma informed interventions, restorative justice circles, and emotional health care and healing. Given that over-policing leads to the over-incarceration of Black people and people of color– the healing centers will serve to support individuals transitioning out of incarceration and back into their communities. The establishment of the healing centers should be executed in coordination with the Office of Racial Equity, community based-organizations, and public spaces (ie. parks and recreation). Local and national models include: Chicago Torture Justice Center , The Reverence Project , and Healing Dialogue and Action

f. Allocate $5 million to restore and increase funding for GRYD for interventionists as a means to ensure and expand community driven solutions to public safety.

4. The City of Los Angeles must establish a fully-funded task force, led by Black community leaders and youth directly impacted by police violence to strengthen accountability and propose alternatives to policing as a means for public safety in the City of Los Angeles. While there have been many key reforms implemented since the Consent Decrees and the 1992 Civil Unrest, now is a moment to strengthen the City’s power to hold LAPD accountable for police misconduct and revisit alternatives to policing.

a. The primary role of the task force is to increase police accountability to communities of Los Angeles. Members will work with the City Council, LAPD Police Commission, city departments, community stakeholders and subject matter experts to develop policies that increase officer accountability, transparency in the investigation of civilian complaints against officers, and revisit the City Charter to strengthen protocols on police accountability and civilian review. As an example, too often, recommendations are made for termination of employment of an office involved in misconduct, but they remain on the force (i.e. 24 hour fitness). In other cases, an officer with repeated violations remains in the community.

b. This taskforce will make recommendations to increase the public’s participation in budget decisions and transparency in public spending on policing; and identify ways to re-allocate resources away from militarization and suppressive policing, and towards new strategies to ensure community safety.

For too long, you and City Council have governed with no intentional community input. This letter is an attempt to initiate a process for you to directly engage with communities that are largely impacted by over-policing and police brutality. The City of Los Angeles must commit to genuinely, and continuously engage with the Black community and youth directly impacted by police violence and systems of oppression, to enact immediate and long term systemic change. Engagement must be both in times of crisis and when opportunities, including but not limited to the budget process. Money should not be a reason for inaction. The City should aggressively pursue revenue generating strategies to ensure long term sustainability of these investments, as well as leveraging CARES Act funding, the reserve, and other sources. Any new revenue shall not be spent on increases to law enforcement funding. We demand that you make the revisions to the FY 2020-21 budget implementing our vision on how the city can begin addressing anti-Black racism. The alliance of partners expects a response by June 8th.

*Organization listed for identification purposes only