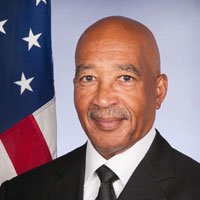 Mr. Lawson retired as a partner after 31 years with Skadden, Arps, Slate, Meagher & Flom. During his tenure with the firm, he was appointed to the Los Angeles Airport Commission, and served as its President. In addition, Mr. Lawson has been a board member of several charitable organizations, Loyola Marymount University and Morehouse College. He served as a U.S. Ambassador in the Obama administration prior to joining the Los Angeles Urban League as its President and CEO in February, 2018. He is a graduate of Loyola Marymount University and Harvard Law School. 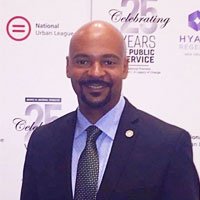 Mr. Williams had a 30-year career as an entrepreneur and corporate executive prior to joining the League as its Vice President and Chief Operating Officer in August, 2017. He managed a family-owned firm in Kansas City, MO, in the years between graduation from college and attending business school. After receiving his MBA, he was a brand manager at Procter & Gamble headquarters in Cincinnati, Ohio, then joined McKinsey & Company as a senior management consultant in New York. Mr. Williams received a BA from Yale College and an MBA from the Yale School of Management.

Before there was a Los Angeles Urban League, there was The Tuskegee Industrial Welfare League, which was organized in April 1921 in Los Angeles by Dr. A. C. Garrott , a black dentist, and Katherine J. Barr, its first Executive Secretary, to help Negroes participate to the fullest extent in American life by helping to change the social and economic conditions of their environment.

In June 1921, the Tuskegee Industrial Welfare League merged with the National Urban League and became known as the Los Angeles Urban League (LAUL) with Katherine Barr as its first President. Under her leadership, the Urban League developed a professional and business-like approach to its mission and objectives. As a result, the organization was able to effect change expediently with winning results.

Always looking for an opportunity to create a broader financial base for operating funds, the LAUL became a Charter Member of the Los Angeles Community Chest in 1925, now known as the United Way of Greater Los Angeles, a collaboration that continues to this day.

Under Floyd Covington, who served as Executive Director from 1931 to 1950, the Los Angeles Urban League grew at an exponential rate. Executive Director Covington departmentalized the activities of the organization by developing Industrial Relations and Community Organization departments. Under his leadership, the Los Angeles Urban League established its own radio broadcast where more than 36 different programs were presented for the weekly Urban League Reports.

Wesley Brazier, former Industrial Relations Director of the Los Angeles Urban League under Floyd Covington, became the Urban League Executive Director in 1950 and served as such until 1968. The decade of the ’50s set the tone for expansion and change which determined the momentum for the Civil Rights Movement in the ‘60s. The Urban League’s agenda included employment development, training and placement, civil rights, discrimination in housing, health, and education.

Brazier sought more ways for the Urban League to extend its outreach to the youth in the community. Consequently, the LAUL became involved in more youth projects and issues. In 1952, the LAUL joined the newly formed Welfare Planning Council Committee which focused on institutional care of Negro children by social service agencies. A year later, the Urban League’s efforts were realized when the Willowbrook Health Center was opened to provide prenatal and well baby services as well as traditional health center service.

In 1952, ten ladies formed the Los Angeles Urban League Guild. A volunteer arm of the LAUL, the Guild included women with experience and knowledge of business, health and welfare, education and social-civic organizations.

During the early ‘60s, the population of Blacks increased by 111.8%. The total population of the Los Angeles-Long Beach Metropolitan area was 6,742,696 of whom 464,717 were Black. The Los Angeles Urban League engaged in programs aimed at providing more adequate services for the Black population by developing training programs for skilled and semi-skilled workers and initiating projects designed to provide solutions to the problems of ghetto residents in the areas of employment and education.

A consummate bridge builder, Mack was able to create connections with disparate groups and he made sure communities of color were represented in both, the corporate board rooms and city hall. From Mayor Tom Bradley through Mayor Richard Riordan to Mayor Antonio Villaraigosa, he always worked to find common ground and create positive change.

John W. Mack retired in July of 2005 after serving as President of the Los Angeles Urban League for 36 years. During his tenure, the LAUL experienced incredible growth, offering numerous programs and services at six sites and 33 Headstart locations throughout the area, a total staff of 280 and an annual budget of $25 million.

The Los Angeles Urban League is now poised to begin, again, the journey that started in 1921 under its first leader Katherine Barr – to help the underserved communities in Los Angeles to participate to the fullest extent in American life by helping to change the social and economic conditions of their environment

Thanks to the support of our corporate and community partners, donors, volunteers and staff, Los Angeles Urban League continues to educate and empower African Americans and other minorities to secure economic self-reliance and civil rights by providing targeted social programs and advocating for issues that benefit our communities.