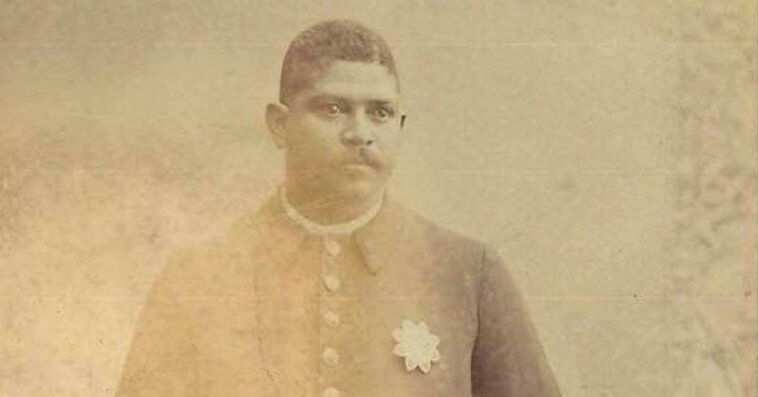 In 1889, Robert William Stewart became the first African American to become a member of the Los Angeles Police Department (LAPD) and one of the first Black officers of any jurisdiction in California. Officer Stewart swore an oath to serve and protect the citizens of Los Angeles in the face of racism and bigotry. Unfortunately, like too many Black men and women throughout our history, Officer Stewart fell victim to injustice due to false accusations and was unjustly relieved of his duties.

Robert William Stewart was born on March 1, 1850, in Kentucky. Born into slavery, Stewart gained his freedom after the Civil War and the abolition of slavery. From there, he would marry a formerly enslaved woman, Louise Coffey, and eventually move out west to Los Angeles in 1886.

In 1889, Mr. Stewart became the first African American Officer in the Los Angeles Police Department. Officer Stewart served with honor and distinction throughout his career. In 1900, however, he was falsely accused of sexual assault by a white teenage girl and was arrested. While awaiting trial, the LAPD fired officer Stewart. Seven months later, a jury acquitted Officer Stewart of all charges. Still, Officer Stewart would never regain his job as an officer of the law. The “Giant in Blue,” as he was known while in uniform, spent his remaining years as a laborer and custodian. Officer Stewart died on July 27, 1931. Days later, the California Eagle would write the following, stating:

“Mr. Stuart (sic) was one of the first colored peace officers in the state…after his appointment, others followed, and ever since that time, the city has had colored officers,” the Eagle wrote. “Known far and wide for his staunch and dependable character, Mr. Stuart (sic) was honored for his integrity and public-spirited citizenship.”

Last year during Black History Month, the Los Angeles Police Commission voted unanimously to recognize the injustice of his termination and posthumously reinstated Officer Stewart. Last week in celebration of Black History Month, the Los Angeles Police Department held a ceremony to honor Robert William Stewart. On February 2, 2022, LAPD Chief Moore formally renamed the roll call room at the Central Division Headquarters to the “Robert William Stewart Roll Call Room” in a ceremony that included a rainbow coalition of senior officers. This recognition is long overdue, but it is never too late to do the right thing.

We accept the efforts of the LAPD and the Los Angeles Police Commission to acknowledge these past injustices and own their history. However, the LAPD and other law enforcement agencies in California have not made enough changes in the 90 years since Robert William Stewart patrolled the

We accept the efforts of the LAPD and the Los Angeles Police Commission to acknowledge these past injustices and own their history. However, the LAPD and other law enforcement agencies in California have not made enough changes in the 90 years since Robert William Stewart patrolled the streets of Los Angeles.

In honor of Robert William Stewart and Black History Month, the Los Angeles Urban League demands that the LAPD and all law enforcement agencies throughout California increase the number of African American officers and other officers of color and hold all officers accountable for any unjust practices within all of our communities. The Los Angeles Urban League will continue fighting for police reform and against injustice.

Please join us in this vital quest.