In Remembrance of Congressman John Lewis 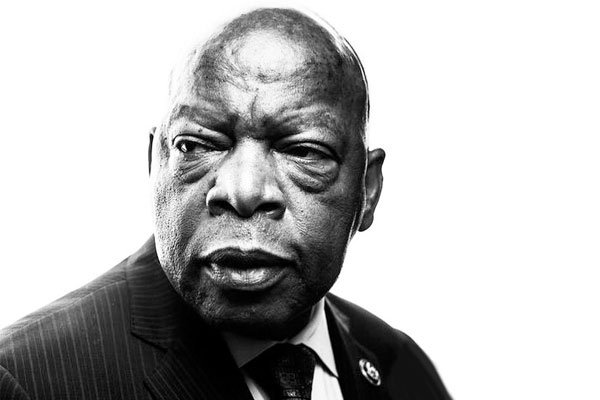 On March 7, 1965, six hundred peaceful demonstrators marched over the Edmund Pettus Bridge on their way from Selma to Montgomery, Alabama, to demand equal voting rights and protest voter suppression. They were met by Alabama State troopers with billy clubs and tear gas. One of the marchers that day was John Lewis, who served as Chairman of the Student Nonviolent Coordinating Committee (SNCC). On what would become known as “Bloody Sunday,” Alabama State troopers attacked the peaceful marchers and, in the process, fractured Lewis’ skull and injured 58 other peaceful marchers so severely that they had to be hospitalized. That day marked the first of three marches that would draw national attention to the fight for civil rights that culminated in the passage of the Voting Rights Act of 1965.

Bloody Sunday is just one of many courageous actions in which John Lewis and others would battle against systemic racism and oppression. His courage and fortitude in the face of injustice would define his life and his legacy. He walked side-by-side with civil rights legends and stood toe-to-toe with presidents – always serving as a moral compass pointing toward justice. At the age of 21, he chose to put himself in harm’s way as one of the original Freedom Riders, rolling into the angry and segregated South to shine a light on the commonplace injustice and brutality. The list of his sacrifices and acts of heroism is endless.

Bloody Sunday took place on a bridge named after a Confederate general, U.S. Senator and “Grand Dragon” of the Alabama Ku Klux Klan. The bridge carries the four-lane U.S. Route 80 across the Alabama River and starts what is known today as the 54 mile “Selma to Montgomery Voting Rights Trail.”

Since Representative Lewis’ death last week, there has been a growing chorus for renaming the bridge in his honor, including a petition with over half a million signatures. I join in this chorus to memorialize the life and legacy of John Lewis. In the wake of national protests against racism and police brutality, Americans are re-examining which historic persons should be revered as heroic and honored with a statue or memorial. Today the bridge is a symbol for justice and equality while, ironically, it still bears the name of a man who symbolizes what our country tries its best not to remember.

While John Lewis was alive, he said that he did not want the bridge renamed in his honor. Respectfully, we disagree. As John Lewis would say: “When you see something that is not right, not just, not fair, you have a moral obligation to say something. To do something.”

John Lewis was one of the great Americans of his generation. He was a humble leader who served as the conscience of our nation. We will miss his voice.

Renaming this bridge would be a small token of appreciation for what he has done for the good of the nation.