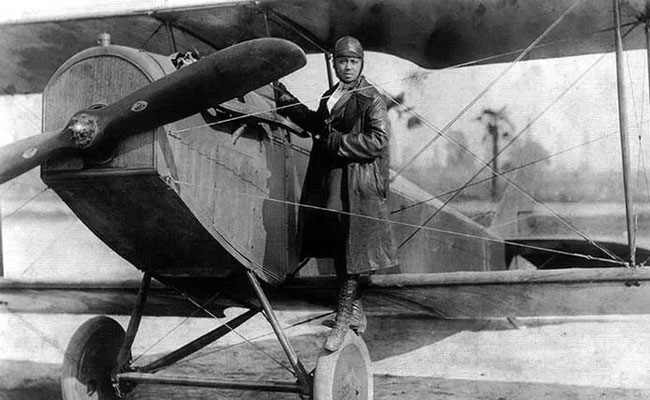 On August 8, American Airlines operated a flight from Dallas to Phoenix with an all-black female flight crew in honor of the aviation trailblazer, Bessie Coleman, the first Black and Native American woman in the world to earn a pilot’s license.  From the pilots and flight attendants to cargo team members and aviation maintenance technicians, the women operated and took charge of every aspect of the flight.  Gigi Coleman, Bessie Coleman’s great-niece, organized the honorary flight to honor the 100th anniversary of Bessie Coleman earning her pilot’s license.

Bessie Coleman was born in Atlanta, TX, on January 26, 1892, into a family of twelve children in a hostile environment.  Her mother worked as a maid, and her father was a sharecropper, but her parents never let their children let their circumstances limit their dreams.  Ms. Coleman worked several jobs, from picking cotton to working as a manicurist.  At least one of her brothers fought in the first World War.  After the first World War ended, one of her brothers returned home from France and shared stories of women pilots.  Inspired by these stories, young Bessie Coleman set her sights on becoming a pilot herself.

She traveled the United States as a stunt pilot in air shows performing aerial acrobatics that wowed crowds from coast to coast.  She pursued her dreams and stood up for what was right, inspiring generations of women to do the same.

Bessie Coleman applied to flight schools across the United States, but none would accept her because she was Black, Native American, and a woman.  Undeterred, she decided to go to France to learn how to fly.  Bessie Coleman took French classes at night and proceeded to apply to flight schools.  She was accepted and received her training from Caudron Brothers’ School of Aviation in Le Crotoy, France, where she received her international pilot license on June 15, 1921.

Often referred to as “Brave Bessie,” this history-maker did not let racism or barriers stand in the way of her dreams.  Beginning with her family’s support until her untimely passing in 1926, Bessie Coleman defied all the odds and conquered every obstacle in her path.  She traveled the United States as a stunt pilot in air shows performing aerial acrobatics that wowed crowds from coast to coast.  She pursued her dreams and stood up for what was right, inspiring generations of women to do the same.

On August 8, 2022, Gigi Coleman said of the historic flight, “I think my great-aunt would have been so proud of these beautiful, talented, courageous women of color.  They were soaring through the blue skies, just like she did, and telling the world that we can accomplish anything in life by working together.”

In 2022, the aviation industry remains dominated by white males, with 83 percent of America’s pilots identifying as white and a mere 10 percent as Black, Hispanic, or Asian.  Of that percentage, only 5.3 percent are women, and only 1 percent are black.  In the words of Gigi Coleman, “The sky is not the limit.  When we work to remove the barriers that inequality has placed in our society, our young black women can see that they indeed can be pilots, doctors, firefighters, and even leaders of this nation.” The Los Angeles Urban League joins the Coleman family in celebrating the remarkable history of Bessie Coleman and works to change these statistics.  We applaud organizations like the Bessie Coleman Aviation All-Stars and our friend in The Movement, American Airlines, for keeping Bessie Coleman’s legacy alive.  But there is more work to be done.  More women and women of color must be encouraged to take advantage of the opportunities available in the aviation industry, and the aviation industry must welcome them with open arms.