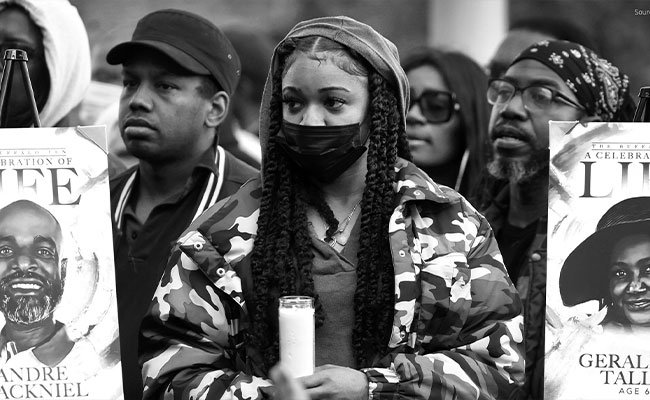 This past week our nation’s collective hearts were broken, once again, by mass shootings motivated by racial and ethnic hatred. One gunman sought to kill members of a Taiwanese religious congregation attending church in Laguna Woods in Orange County, CA. Another gunman traveled a long distance to kill people he did not know for reasons based on racist lies at a neighborhood grocery store filled with Black families in Buffalo, New York. Although the investigations are not yet complete, the motives are clear.

…a national epidemic of gun violence fueled by domestic right-wing extremism that will continue as long as it has the support of well-heeled gun merchants, the right-wing mainstream media, and an uncontrolled right-wing social media.

According to a recent CNN report, there have been 201 mass shootings in the United States this year, and we are less than halfway through the year. These are not isolated incidents; they are part of a national epidemic of gun violence fueled by domestic right-wing extremism that will continue as long as it has the support of well-heeled gun merchants, the right-wing mainstream media, and an uncontrolled right-wing social media. Year after year, we witness new violent confrontations made worse by military-level weaponry, yet we see no change. We only experience more collective trauma as we try to move past what we cannot forget. As the gun violence continues and Americans shout and cry from the streets, too many of our elected leaders stay silent or hedge their political bets.

How many innocent lives must we lose at the hands of homegrown domestic terrorists? How many lives must we lose before we make the changes necessary to keep our loved ones safe from strangers who have unfettered access to weapons of war?

From the Buffalo shooter’s manifesto, we know that Saturday’s tragedy was a sickening and disturbing effort to uphold white nationalism and stop the so-called “Great Replacement.” For centuries, this destructive thinking has been the excuse for and root cause of violence against Native Americans, Black Americans (enslaved, descendants of enslaved people and never enslaved), Hispanic Americans, Jewish Americans, Asian Americans, and even European immigrants such as Irish and Italian Americans.

Laguna Woods and Buffalo join a long list of communities whose families, businesses, schools, and churches have been changed forever by gun violence. Until we, as a nation, begin to confront the twin threats of domestic extremism and reckless gun policies as the grave crises they are, innocent people will continue to pay this deadly price.

Our prayers are with the families and friends whose loved ones were killed or wounded in the Buffalo and Laguna tragedies, but our prayers are not enough. We must gather the strength necessary to support the victims, their families, friends, and communities and insist that our legislators take the actions needed to end these tragedies and the lies on which they thrive. At the Los Angeles Urban League, we call on our local, city, county, and state leaders to bring our communities together and do their part to end the divisive rhetoric and easy access to weapons of war.