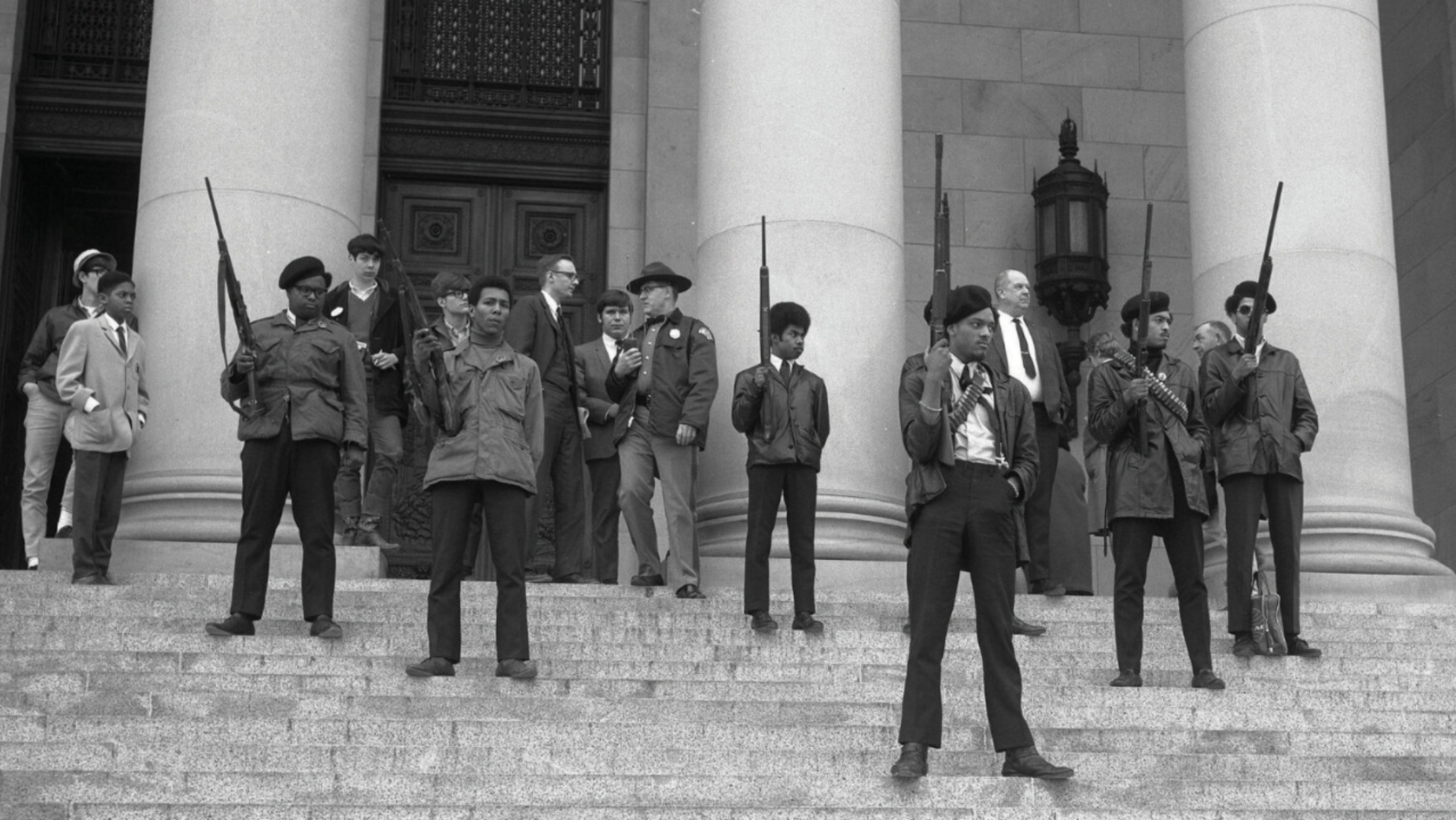 In 1966, on the eve of the Summer of Love in San Francisco, the Black Panther Party for Self Defense began as a small community organization. The founders were Huey Newton and Bobby Seale. Under California law, it was legal to carry guns in public as long as the holder did not point the guns at someone. Inspired by Malcolm X and his call for freedom, independence, and equality for Black people “by any means necessary,” Huey Newton and Bobby Seale used the gun as an integral part of the identity of the Black Panther Party. Counter to Martin Luther King Jr.’s philosophy of non-violence, the Black Panthers saw firearms as a tool and a symbol to achieve the freedom and independence sought by so many African Americans.

In reaction to rampant harassment and brutality by Oakland Police at the time, the Black Panthers created armed “Police Patrols” to protect African Americans from the Police. The Panther Police Patrols would follow the Police, and when they stopped a Black person, the Panthers would park their car, get out of their car with their guns and shout out legal advice to the persons the Police chose to stop. The role of the Panther Police Patrols was not to incite violence but to discourage the Police from harassing Black citizens by acting as armed witnesses to the police encounter. Huey Newton was known to carry a law book with him whenever he went out on patrol, and he recited from it when he felt the need to inform a Police officer of his right to carry his weapon.

The role of the Panther Police Patrols was not to incite violence but to discourage the Police from harassing Black citizens by acting as armed witnesses to the police encounter.

In compliance with those laws, the Black Panthers used their understanding of the finer details of California’s gun laws to underscore their political statements about the subjugation of African-Americans. They instituted armed “Police Patrols” to protect African Americans from Oakland police harassment. As expected, the Police did not like being policed, and Don Mulford, a conservative Republican state assemblyman representing Oakland, sought to stop the Panthers’ police patrols. Mulford proposed a bill prohibiting carrying a loaded weapon in any California City to disarm the Panthers. When Huey Newton and Bobby Seale found out about the proposed legislation, they planned to lead a group of Panthers “loaded down to the gills” to the state capitol to demonstrate their opposition to any new gun control laws.

On May 2, 1967, two-dozen heavily armed members of the Black Panther Party marched up the front steps of the California State Capitol building carrying unloaded rifles, pistols, shotguns, and wearing dark glasses, leather jackets, and berets. The Black Panthers sought to demonstrate their opposition to the ‘Panther Bill.” As a result of the demonstration, the National Rifle Association (NRA), Ronald Reagan, and Republicans across the nation acted swiftly to back stricter gun laws and sparked enthusiastic support among Republicans for increased gun control. Upon passage of the Mulford Act, Gov. Reagan said there is “no reason why . . . .a citizen should be carrying loaded weapons on the street today.” Later he said, “The Mulford Act would work no hardship on the honest citizen.” Later that year, in August 1967, FBI Director J. Edgar Hoover deemed the Black Panthers a” black nationalist, hate-type organization.” He maneuvered to have the group neutralized by COINTELPRO, a notorious national initiative to co-opt and undermine civil rights or other movements deemed anti-American by Mr. Hoover.

The 1960s was a time of massive racial and political unrest in this country. In the same year, the Black Panthers walked into the California Capitol with loaded weapons; there were racial uprisings in Detroit and Newark, where Police and National Guardsmen were met with sniper fire. In 1968 a racist used a Remington rifle to kill Martin Luther King, Jr. Two months later, a .22-caliber revolver was used to kill Robert F. Kennedy. The next day, Congress passed the Omnibus Crime Control and Safe Streets Act of 1968. Months later, the Gun Control Act of 1968 expanded that law. While these laws were aimed at excluding gun sales to those convicted of a felony, mentally ill, illegal drug users, and minors, included also were provisions to restrict the importation of small, cheap, poor-quality handguns called “Saturday Night Specials.” These guns were primarily used in poor minority neighborhoods, spiking usage over the weekends. The targeted ban on these guns was explicitly aimed at African Americans, with some saying the new laws were passed to control Black citizens – not guns.

As we mourn our most recent gun violence atrocities in Laguna Woods, CA; Buffalo, NY; Uvalde, TX; and Tulsa, OK, we see renewed support for stricter and more effective gun control laws. However, we do not see support for more effective gun control laws from the National Rifle Association or the Republican Party. For the National Rifle Association and the Republican Party, the issue has never been about the control of guns, and it has always been about the control of people, especially African Americans and other people of color. Until we address this issue, we will continue to be the country with more mass shootings than any other country.

THIS MUST END NOW!

Yours in the movement.