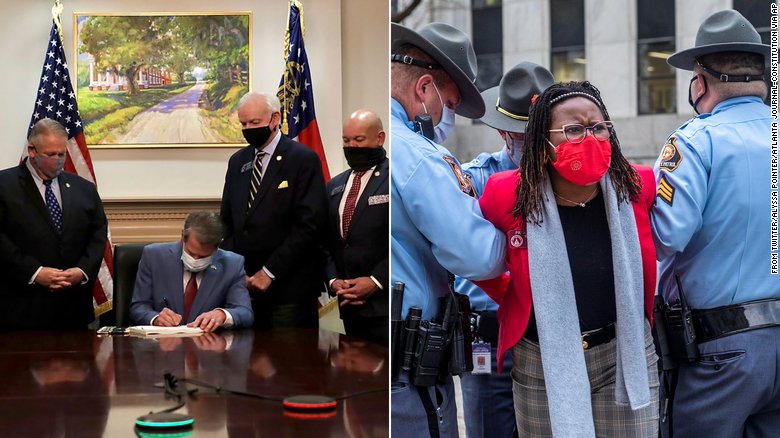 Last week, Georgia Governor Brian Kemp signed into law a shameful law that places Jim Crow era-like restrictions on voting and gives unconscionable oversight and control over the very elections that determine their fate. Governor Brian Kemp signed this shameful bill amongst a gathering of all white male politicians, with a painting of a plantation hanging overhead. Simultaneously, GA State Representative Park Cannon, a black female, was just outside the door, being led away in handcuffs by state troopers, a clear demonstration of this unconstitutional legislation’s intended effect.

This shameful resurrection of the Jim Crow is not limited to the Georgia statehouse. Republican-led legislatures in 43 states are engaging in similar efforts falsely masked as efforts to ‘uphold democracy.’ We have heard these lies far too often and are all too familiar with what this is. More than ever, we must take action now to stop this illegal and shameful return to a shameful period in our nation’s history. The Los Angeles Urban League stands with the recent Call to Action by America’s leading African American business leaders. We must call on these corporations to end their silent complicity and stand up for what their leadership knows is right and denounce what they know is wrong.

This week in a New York Times article, Kenneth Chenault, former chief executive of American Express, and Kenneth Frazier, chief executive of Merck, expanded on their newly formed coalition to combat the heinous voter suppression tactics we are seeing take place across the nation. In it, Mr. Chenault and Mr. Frazier express how the goal is not just to bring together all of the black business leaders in the country; it is to bring together all of corporate America in this fight for equal voting access and rights. The letter, signed by 72 black executives, is meant to encourage major corporations to use their considerable influence and join in the effort to demand that state and local governments reject these and any other attempts to suppress the right to vote. As Mr. Frazier states in the article, “the Georgia legislature was the first one, if corporate America doesn’t stand up, we’ll get these laws passed in many places in the country.”

We have already seen how this mounting pressure can change the conversation. Just last week Georgia based companies like Delta and Coca-Cola reversed course from a general statement regarding the Governor’s new bill to unequivocally denouncing it, with the chief executive of Delta now calling the bill “unacceptable.” The MLB is also in talks to move this year’s All-Star game from Atlanta to a new location. Similar actions are happening in Texas and other states as well.

All of these sudden changes of opinion have taken place in mere days, not weeks or months. We cannot stand down or step back from this moment because we know that our voices can reach from Wall Street to Washington.

We must take a stand against all of those seeking to strip us of our constitutionally protected rights because this will not be the new Jim Crow Era. This era will be the era of change, and we will keep fighting for the future we seek to build.